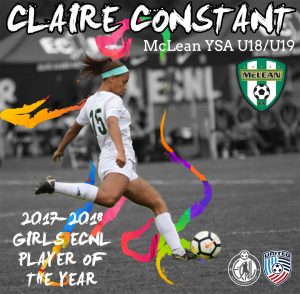 Constant’s tenacious play in 2017-18 has cemented her legacy in the ECNL and her club, as she helped lead McLean YSA to their first ECNL National Championship.

“Claire was an exemplary vocal leader, had tremendous on-field production, selflessly played multiple positions, picked her teammates up when needed, exhibited humility, and so much more,” said McLean YSA ECNL U18/U19’s head coach Nadir Moumen. “She has had such a great year and it is fitting that she has been recognized. Congrats to her on being named the Girls ECNL Player of the Year.”

The 2017-2018 Girls ECNL All-America Team includes players from every conference and more than 20 ECNL clubs:

“These players represented the very best of female youth soccer in the 2017-18 season, and their performances in the ECNL stood out to coaches all over the country,” said Girls ECNL President Christian Lavers.  “The first ever ECNL All-American Team represents a group of young players with an exceptional future in the game, and we look forward to watching them continue to grow and shine in the ECNL and beyond.”

About Girls Elite Clubs National League: The Girls Elite Clubs National League (Girls ECNL) was founded in 2009 to enhance the developmental experience of female youth soccer players in the United States through: (i) improving the competitive environment through creation of a true national competitive league; (ii) improving the process for identifying elite female soccer players through a systematic scouting and identification program based on national competitions; and (iii) improving the daily training environment at top female youth soccer clubs through developing best practices and training and organizational guidelines for its member clubs. The ECNL is sanctioned by US Club Soccer and is sponsored by Nike Soccer.

About United Soccer Coaches: Founded in 1941 and headquartered in Kansas City, Mo., United Soccer Coaches is the trusted and unifying voice, advocate and partner for coaches at all levels of the game. The association provides programs and services that enhance, encourage and contribute to the development and recognition of soccer coaches, their players and the game we love. To learn more, visit UnitedSoccerCoaches.org.